Biography: Mr. Edwar Carranza is a Salvadorean native; he grew up and attended public schools in El Salvador then moved to Los Angeles at age 17. His passion for teaching came to him at a very young age, his enthusiasm and love grew as he participated in his town's church events and became the lead server of a catholic group in his teen years. Those years made a big influence in his life by strengthening his desire to teach and help others throughout God's guidance. He attended high school in Los Angeles and is now an Angelino by heart. As he was making a new life in California, soccer and having good grades in high school became his priorities; he joined the varsity team in his freshman year and won multiple league championships, tournaments, and helped his High School win 3rd place in the city of LA high school soccer competition. He was also a member of private soccer club and represented his native country El Salvador overseas. He then continued his soccer passion by being part of the Glendale Community College soccer team and now enjoys playing soccer in his free time.

Mr. Carranza’s undergrad studies at CSULA shaped him get ready for the teaching field and got a position as a Teacher Assistant in his alma mater, Manual Arts High School. He wanted to give back to the community and offered a hand to the students in need, to which, he related to. He was able to empower students achieve their potential in both Spanish and Mathematics and influenced them to pursue higher education.

Mr. Carranza then started exploring the world of the most needed kids in school and started working with special education kids in a local middle school. His teaching passion got stronger when he was exposed to provide care, education and guidance to all type of students.

He enjoys teaching and showing new learning methods to all students who seek his help.

Mr. Carranza’s goal is for students to master the wonderful Spanish language fluently and provide a comfortable and peaceful learning environment in which students can grow both spiritually and academically to become successful in life with God's help. 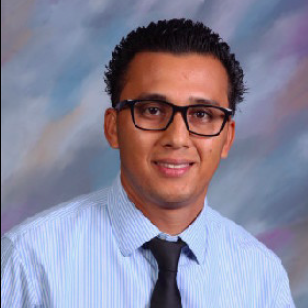