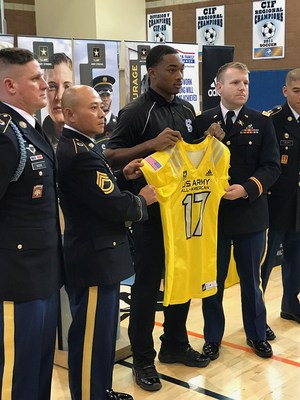 Lenoir was selected as one of the top 90 football players in the country and will be playing in the All-American Bowl at the Alamodome on Saturday January 7, 2017. A special jersey presentation took place at Salesian on Thursday, December 1st. The game will be televised live from San Antonio on NBC at 10am PT. Congratulations Deommodore!

The history and tradition of the U.S. Army All-American Bowl is unparalleled, highlighted by Heisman Trophy winners and more than 200 NFL players counted among its alumni. Throughout its 17 years, the game has featured the nation’s most elite football players before they reach stardom.  Just some of these alumni include: Odell Beckham Jr., Derrick Henry, Andrew Luck, Adrian Peterson, Christian McCaffrey, Eric Berry, Patrick Peterson, Ezekiel Elliott, and hundreds more. (from http://www.usarmyallamericanbowl.com