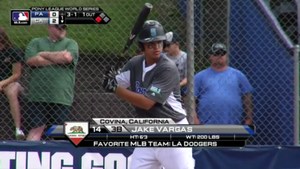 Jacob Vargas '20, Pony World Series Champion representing Covina, California and Salesian High School in the championship game against South Korea!
Jacob Vargas, sophomore at Salesian was recently crowned champion as part of the 2017 Pony World Series having represented his hometown of Covina, California in the pinnacle of youth baseball against South Korea.
Vargas who is a dual threat on the mound and in the batter’s box displayed his great technique and skill throughout California, before eventually advancing to Pennsylvania. This momentous occasion was shared with his father Juan and brother Matt (’14), who coached Jacob on to victory.
Last year as a freshman, Vargas was one of two freshmen to start on the varsity baseball team. As a fourteen year old, he recorded a nearly perfect pitching campaign and lead the team to a Division V CIF Playoff appearance.
The Salesian High School community congratulates Jacob on a job well done representing Salesian!