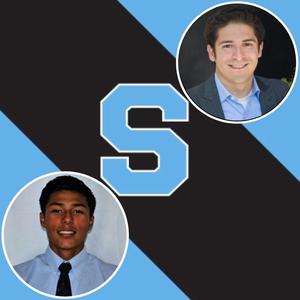 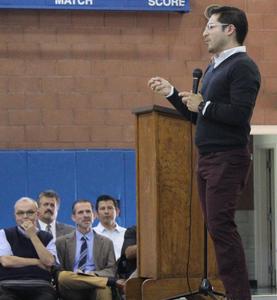 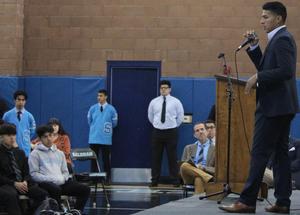 SHS Alumni, Octavio Gonzáles and Steven Luevano, returned to their alma mater to speak about life after high school.

On Friday, September 21st, Octavio Gonzáles returned to his alma mater to speak to the entire Salesian community about his time in high school and after college. Throughout his speech, he stated, “You’re going to make memories here at this school, with the some of the best people that come into your lives. Keep them close to you, because we are family.”

After graduating from Salesian, Octavio went on to Georgetown University and earned his Bachelor of Arts in Government with a Minor in U.S. History and Theology. He also holds a Masters in Public Administration from Harvard University. Throughout his many positions in local and state government, Octavio founded Fourth Street Bridge Strategies, LLC. A full service public affairs and consulting firm, which focuses on serving underserved Latinos and Latino communities.

On Friday, October 19th, Salesian grad and current Loyola Marymount University sophomore, Steven Luevano, spoke to the student body on how his transition from high school to college opened his eyes. During his talk, Steven told the audience, “Salesian will prepare for you for the world. It’s your job and responsibility to go out there and make a positive impact, and then share your success with others.”

Steven graduated from his alma mater in 2017 and is currently majoring in accounting and finance, at Loyola Marymount University. He is also a financial analyst intern for Airbnb. Throughout his time at Salesian, Steven was actively involved in many student organizations and was voted by his peers as the class speaker at his graduation.